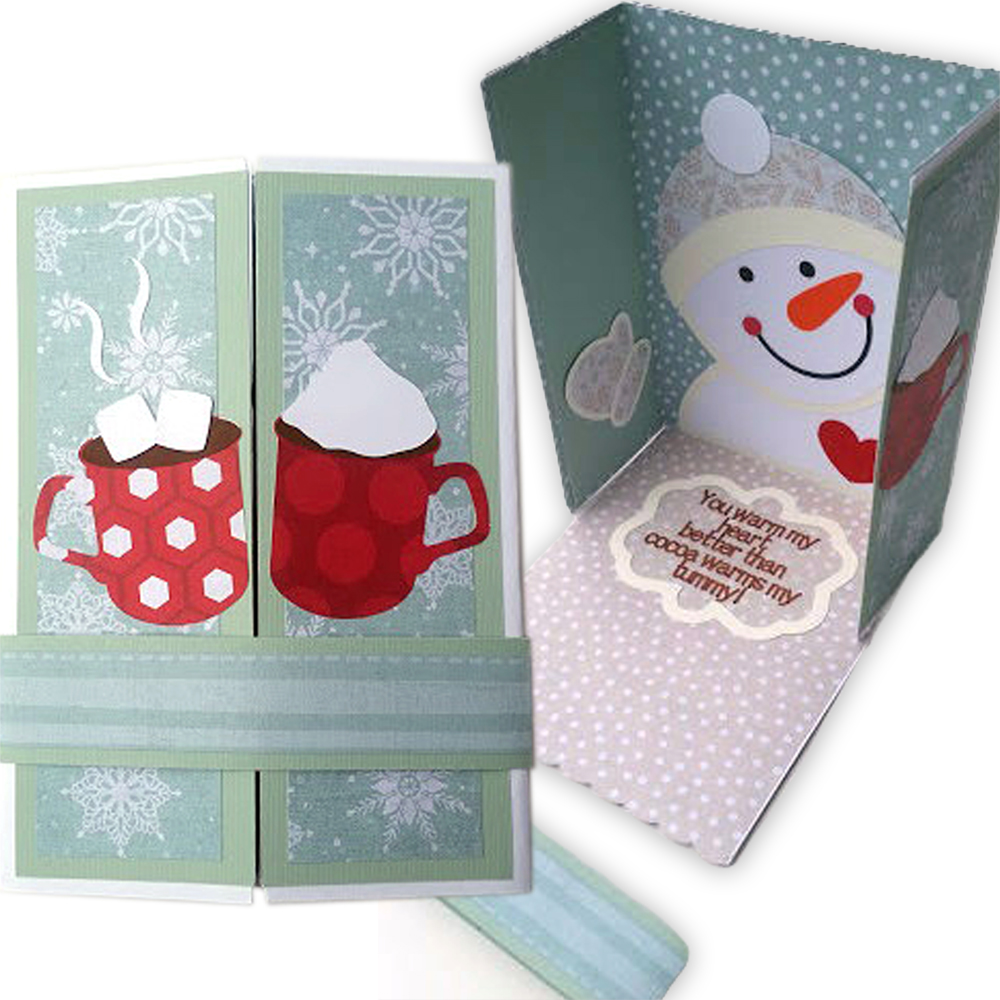 Among its many fun and useful files, the Pazzles Craft Room Library has several great collections of Fun Folds card bases to choose from to make great stand out cards for special occasions and just because. As with all the Library files, you can use them in any combinations, sizes and orientations to suit your fancy! This month I chose the Fun Folds 2 Center Flap file and used it upside down to make a wintery card to offer thanks for a gift or experience from the holidays or just to let someone know you are thinking about them! I discovered when I was finished that I could tuck two cocoa packets (one upside-down) into the card band on the back to give my recipient a coordinated treat! 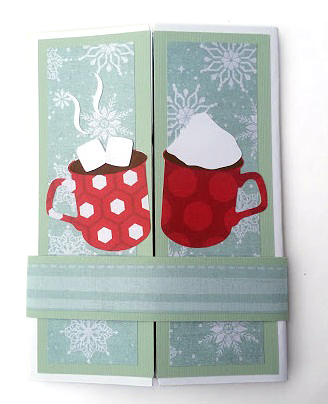 I opened the Fun Folds 2 Center Flap file in my Inspiration Studio Pro 2014 software and enlarged the entire file so that the card base portion was as large as would fit on a 12” by 12” sheet. I decided that it would be fun if the large fold in the center flopped down automatically when the card is opened, so I rotated the whole file 180 degrees. I am obsessed with snow folk and, cocoa is pretty high up on my favorites list this time of year so I looked through the Pazzles Craft Room Library for files relating to these topics that I could use to fill up my card base. I chose the Snowman from Above file for the snowman head and hat, the Christmas-Marshmallow-Mug file for the cocoa mug and marshmallows, the Doodle Frame Square Tag file for the sentiment frame (which I modified), the Hot Cocoa Mug file for the whipped cream cocoa topping and the Mitten Snowman file for the mittens. 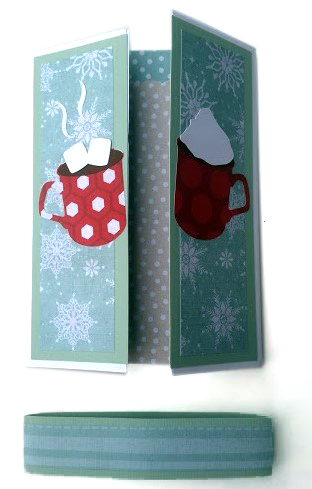 I cut the card base from a 12’ by 12’ piece of white COLORBÖK Solid-Dyed Core Premium Cardstock. I had three print papers (snowfall on green, snowfall on créme and snowflakes on green from a DCWV All About Christmas Stack) and a coordinating solid sea green cardstock sheet from a Craft Smith Cool Neutrals Paper Pad that I wanted to combine to decorate my card. Using the shapes in the Fun Folds 2 Center Flap file I changed the kiss cut line for the panels to a solid line and cut the smaller (was kiss-cut) front panels from the snowflakes on green paper. I cut the larger front panels from the solid sea green cardstock (without the inner kiss-cut line) and cut the larger side panels for the inside of the card from the solid sea green, utilizing the kiss cut line. 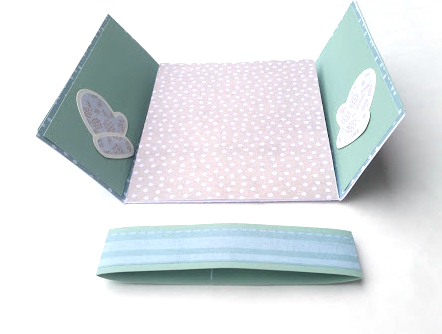 I created a rectangle that covered the inside of the card plus the side panels and cut this from the snowfall on green paper (for this piece you would want to choose a paper thinner than cardstock in order to prevent buckling when you glue them together). I used a duplicate of the card base and cut off the main card, retaining the folding flap with the scallops, duplicated the flap and flipped one image so that I could cover both sides of the flap with the snowfall on créme paper. I cut the snowman head, hat pom and snowman body (which I created with the line drawing tool and the move point tool) from Recollections White Cardstock Paper. I cut the outlines of the snowman head, body and mittens and the trim of the hat from a créme sheet of Craft Smith Neutrals Cardstock Stack. I cut the mittens and hat from a pinecones and branches on tapestry beige sheet from the DCWV All About Christmas Stack and the eyes, nose mouth and heart from a set of cardstock fat stack scrap I had in my stash. I cut the mugs from scraps from the DCWV All About Christmas Stack and used the set of cardstock fat stack scrap I had in my stash to “fill” them with the oval of cocoa. For the sentiment, I didn’t want to cover the snowy look of the paper, so I created a vellum tag with frame using the the Doodle Frame Square Tag file. I used the back portion of the file which I cut in half using the Cut Straight Line feature, then I overlapped it and welded it back together to form a smaller (shorter) tag. I outlined it and inlined it at 0.10 choosing the inner and outer lines for the frame which I cut out of a créme sheet of Craft Smith Neutrals Cardstock Stack and used the middle size line to cut the vellum after using a fine point brown Sharpie and the Pen Tool to write the sentiment in 0Calypso Medium Rhinestone font. 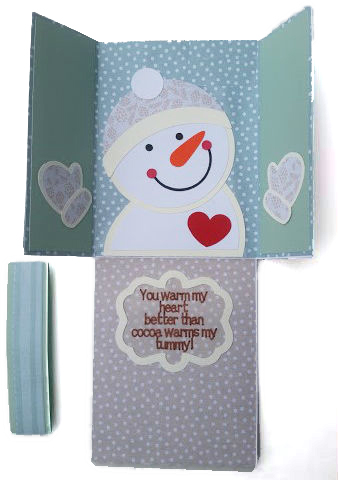 The card front embellishments were made from the mug from Christmas-Marshmallow-Mug (shortened and duplicated then flipped horizontally). The marshmallows on the left mug were made from the same file; to add dimension to the marshmallows, I duplicated them and then used the move point tool to pull down the top line of the front (duplicate) marshmallow in an arc. For the whipped cream on the right mug I used the solid whipped cream from the Hot Cocoa Mug file. For the steam I just drew a line with two segments using the line tool and used the move point tool to curve each line in opposite directions, then I duplicated it and placed in next to the first line and used the join two points tool to fuse the ends together, making a few adjustments with the move point tool until I had what I liked. I made the card band from the Craft Smith Cool Neutrals Paper Pad solid sea green paper and a green on green stripes sheet from the Die Cuts With a View (DCWV) All About Christmas Stack. I assembled the card and adhered everything in place with a Scotch Permanent Glue Stick. Once dry, I closed the card and inserted it into the card band, then tucked in two instant hot cocoa packets, one from the bottom of the card band and one from the top on the back of the card. Yumm!

I hope you will enjoy making your own version of this card for someone special or trying another of the Fun Folds, Fun Folds 2 and Fun Folds 3 Collections cards. The possibilities are endless!

I Heart You Card

2 thoughts on “You Warm My Heart Card”