Wait. What is this? Another InVue update less than two weeks after 2.2 came out? Why yes it is! InVue 2.2.1 was released today. Here’s a quick run down of the what’s new with this update:

When using the Move Point tool you can now double click to convert a segment into a bezier curve. 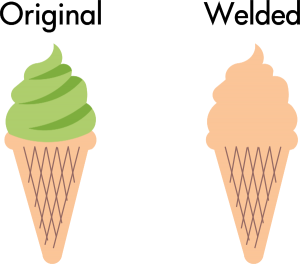 Welding with open paths now preserves the open paths and places them on top of the welded shape.

This version of InVue updates the welding tools in order to better handle welding when open paths are included in the selection. With this change, if your selection includes open paths when welding these paths will be ignored during the welding process and will be placed on top of the finished results from you weld.

This version of InVue includes a number of changes to the SVG export option. Some of the changes include support for transparency groups and support for exporting images (png, gif and jpg) that are included in your document. Please note that it is up to individual software developers to support these SVG features in their respective application. We are aware that not all software currently available support all these features as implemented by InVue.

As usual there are also number of bug fixes, tweaks, and under the hood improvements.  If you would like to read the full update notes for 2.2.1 you can see them when updating your software or check out the forum post here.  Thank you for choosing Pazzles and craft on!