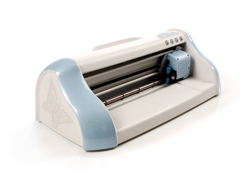 Every once in a while I get a question about why the Inspiration makes noise when it cuts and how to turn it off. We are busy people and often that means finishing up projects late at night while the kids are sleeping. I understand that having a whisper quiet machine can be very handy, but I wanted to take the opportunity to explain why the Inspiration makes sound as it cuts.

Having the most amount of power to the Inspiration is important for a lot of reasons. One, it doesn’t limit you on the kinds of material you are able to cut. You need a pretty strong motor to cut through thick materials such as chipboard and acrylic. Without having enough power behind the blade you would be limited not only by thickness, but by the kinds of materials you would be able to cut through. We decided that having a more powerful motor was a greater demand than having a silent Inspiration. After all it was a purchase designed to cut through an array of different mediums—a crafting tool to meet your different needs.

Explaining the internals of a motor can be a bit overwhelming. Basically the Inspiration is equipped with a stepping motor. In simple terms this means that for every one step that the first motor makes the other motors moves seven times, or works seven times harder than the first motor. So you not only have one motor running the Inspiration, but two. As a result the variability of noise is based on the speed of the two motors and a combination of different speeds between the motors working together. We could have created a whisper quiet Inspiration, but as a result we would have reduced the amount of power of the Inspiration. So it’s a trade off, but we think it is a good trade and hope that you agree!

What is That Sound?

Powering Off Your Inspiration